Cat-Proof Fence--Five Miles of it 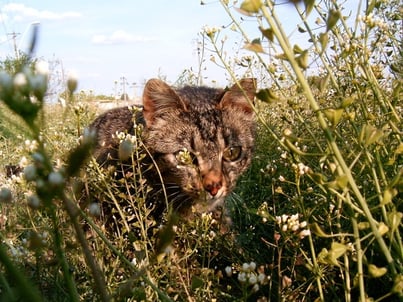 In the lava crevices on the slopes of Moana Loa, the Hawaiian petrel nests. Now a bit less nervously as a 5-mile hexagonal mesh fence protects these endangered birds from feral cats, who stalk and feast on the birds' vulnerable chicks. The curved floppy top of the fence prevents the cats from successfully scaling it. Take a look at this video which explains the massive undertaking of installing this cat-proof wire mesh fence in a remote location as well as showing the nesting habits of the ' (or Hawaiian petrel.)

There used to be thousands of petrels and it is said that their presence would blacken the skies at particular times of the year. The population has dwindled due to increased settlements and people bringing in cats, rats, feral pigs, and barn owls. The struggle goes on as lights are very disorienting to the young birds, causing groundings, which leave them vulnerable to predators. The ' is also preyed upon by Indian mongooses and feral dogs which this fence also restrains. Two years on, there are reports that this hexagonal mesh fence is proving successful as there is an upturn in the number of nesting sites in the area.

Tell us about the job and Louis Page will supply the type of fence you need.